Why are POS Systems So Expensive? 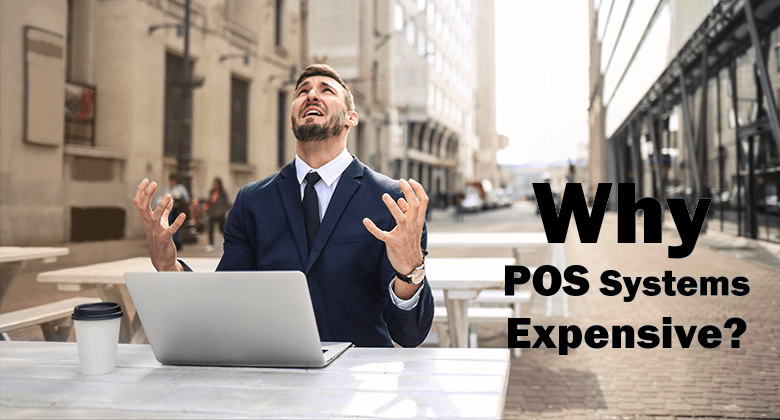 A point-of-sale (POS) system is an important investment for any small business and one you should not take lightly because it can be quite expensive.

Price of a POS system varies widely depending on the type of hardware and software being used. In other words, a high-end system is not priced the same as a mediocre one.

To ensure that you don’t overspend by buying an expensive system, which your company may not even need, you should learn how to choose the right POS system for your business.

Even though most POS systems cost more than a few hundred dollars, some can go as high as $20,000. So what exactly makes a system more expensive than others?

Allow us to give you an in-depth answer.

The following three expenses contribute to the total cost of a POS system:

The good news about buying POS hardware is that it’s a one-time payment. You don’t have to pay recurring fees regularly as you do with software.

But the bad news is that hardware costs a lot of money upfront. Here’s a list of some popular devices used in POS systems, along with their typical price range:

Generally, POS software companies charge a monthly or yearly subscription fee that varies depending on the following three factors:

If you run a single location with one register, then the average provider will charge you between $50-$100 per month for their POS system.

On top of paying for POS hardware and software, you have to pay for a processing fee on every transaction — which is typically carried out by a third party.

So you should always discuss payment processing fees with a POS system provider to save yourself from any surprises later.

Since the cost of a POS system is not the same for a small business and a large one, we will give you a separate average total cost for each:

Small Businesses A small business with one location, one register, one cashier, and only a couple of products to sell needs a light POS software package that costs around $60-80 per month.
On top of the software, they have to typically spend $500-$2,000 on POS hardware. So that’s a total of between $1,220-$2,960 for the first year.

Large Businesses A large business with five locations, five registers, ten cashiers, and around a hundred products to sell needs a heavy-duty POS software package that costs around $180-$280 per month.
On top of the software, they have to normally pay $3,000+ for POS hardware. So that’s a total of between $5,160-$6,360 for the first year.

With our professional package, you pay significantly less. Instead of a grand a year, you pay only $249 and that too for one time only.

We are so confident in LinkedPOS that we even offer an express package which is totally free! You can download it to set up your POS system today.